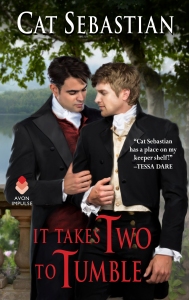 It Takes Two to Tumble is the story of a free spirited vicar and a grumpy sea captain.  It’s basically a gay, regency Sound of Music, with far fewer children and no musical numbers.

Sebastian’s latest elegantly and eloquently written Regency historical, which puts a clever, same-sex spin on the classic employer/governess trope, slowly unfolds into an unforgettable love story that manages to be both sweetly romantic and sizzlingly sensual at the same time, demonstrating once again why Sebastian is one of the brightest new stars in the romance genre.—Booklist (starred review)

Sebastian’s novels make you believe in the possibility of a world built on love, respect, and hope. This is one of my favorites of the season. —Bookish

Some of Ben Sedgwick’s favorite things:

After an unconventional upbringing, Ben is perfectly content with the quiet, predictable life of a country vicar, free of strife or turmoil. When he’s asked to look after an absent naval captain’s three wild children, he reluctantly agrees, but instantly falls for the hellions. And when their stern but gloriously handsome father arrives, Ben is tempted in ways that make him doubt everything.

Some of Phillip Dacre’s favorite things:

Phillip can’t wait to leave England’s shores and be back on his ship, away from the grief that haunts him. But his children have driven off a succession of governesses and tutors and he must set things right. The unexpected presence of the cheerful, adorable vicar sets his world on its head and now he can’t seem to live without Ben’s winning smiles or devastating kisses.

In the midst of runaway children, a plot to blackmail Ben’s family, and torturous nights of pleasure, Ben and Phillip must decide if a safe life is worth losing the one thing that makes them come alive.

CW: past parental neglect, MC who deals with internalized shame of his dyslexia, explicit sex, secondary character with an illness similar to MS, period typical ableist attitudes regarding a disabled woman’s marriageability